Andrew Manly, communications director of the Active & Intelligent Packaging Industry Association (AIPIA) takes a look at how new packaging technologies, many of which are aimed at or have been developed in Asia, are set to change the face of beverage packaging.

Andrew Manly, communications director of the Active & Intelligent Packaging Industry Association (AIPIA) takes a look at how new packaging technologies, many of which are aimed at or have been developed in Asia, are set to change the face of beverage packaging. In the highly competitive world of beverages, including alcoholic beverages, it can be the things which differentiate your brand from the rest which make the difference. Active and Intelligent Packaging (A&IP) can work on a number of different levels to help products stand out on the shelf, extend shelf-life, confirm authenticity and condition, or generate a new level of consumer engagement and confidence.

Firstly, we focus on Intelligent Packaging and how it works. Put simply, it is a device or code incorporated into the pack, which can be activated using movement, touch or sound and, more and more commonly, by interacting with a smartphone via an app or reader function. It lends itself particularly to products using bottles or other rigid packaging, although some flexible packs are now able to incorporate certain functions.

A major driver of smart packaging for beverages is the level of counterfeit goods entering the market, particularly Asian markets. The damage this can do to brand image, as well as the very real risk of harm to consumers if a toxic substance is sold as a beverage, means this issue is now top of many company agendas.

One of the major problems for brand owners, particularly those selling high value wines and spirits, is that original packs are being refilled with counterfeit products. So the smart packaging has to operate in a number of different ways. For example, has the pack been opened before?

Additionally the amount of counterfeit goods entering some markets is truly staggering. A recent estimate of the premium wine market in China said the level of fake products could range between 50 and 70 percent. Fortunately, several new products are now on trial, or already launched, which could help reduce this figure. We take a look at some recent developments here. In mid-2015 Thinfilm Electronics, a developer of printed electronics (PE), launched a fully printed Near Field Communication (NFC) sensor tag—called OpenSense—in conjunction with global drinks company Diageo. It is designed for use on bottles to authenticate the contents or to indicate if its seal has been broken.

A prototype bottle of Diageo’s premium Johnnie Walker (JW) Blue Label Whisky, containing the tag, was shown at the Mobile World Congress in Barcelona last year. The tag (made commercially available in late 2015) sticks to the side of a bottle, which expands its use to cosmetics, pharmaceutical products or perfume, rather than limiting it to just beverages. The tag extends to the cap so that any effort to break the seal would also damage the tag and, while keeping the response function to an NFC reader, would also transmit data to say the seal had been broken.

The company explained that the patent-pending tag will not only act as a security or anti-counterfeit device, but can also include information for consumers. They need simply tap their smartphone on the device to receive cocktail recipes for spirits, compatible foods, offers and other marketing messages. A secure cloud database—like the Internet of Things (IoT) Smart Products Platform produced by software company Evrythng—tracks product lineage and provides supply-chain analytics.

The pilot will allow the whisky maker to gauge how consumers respond to the interactive labels, which can incorporate security features such as opening detection as well as tracking bottles through the supply chain. The company says early feedback has been ‘positive’ and it is running background operations to test scalability—an issue with PE production.

Thinfilm then announced a partnership with G World, a global authentication company, to produce the first ‘smart’ wine bottle powered by PE. The product was demonstrated at the Mobile World Congress in Shanghai last July.

This ‘smart’ wine bottle’ features the OpenSense tags and G World’s patented Samscan process. With the high levels of fake wine sold in China, this new solution will aid authentication of individual bottles throughout the supply chain, ensuring they are packaged, shipped, stocked and purchased in their original factory-sealed state, it is claimed.

The partners are now undertaking a live field trial in collaboration with Ferngrove Wine Group, a Chinese-owned, Western Australian premium wine company. The group exports more than 600,000 bottles annually to China alone, with more than 50 retail outlets throughout China. The first order for tags has therefore exceeded one million units.

But it is not only the alcohol sector which is taking advantage of A&IP. Using Active technology, Brazil-based agribusiness Agrindus SA Empresa Agrícola Pastoril has discovered a way to more than double the shelf life of its Letti-brand pasteurised fresh whole milk to 15 days, from seven days. This is achieved by incorporating silver-based micro-particles with bactericidal, antimicrobial and self-sterilising properties into the bottle’s rigid polyethylene.

The process was developed using nanotechnology from Nanox Tecnologia, also located in Brazil. The micro-particles, which come in powder form, are added in the PE pre-form prior to being blow moulded or injection moulded into a bottle. Because the micro-particles are inert there is no risk of them detaching from the packaging and contaminating the milk, say the companies.

Another milk or juice pack uses three-dimensional (3D) additive techniques to make a ‘smart cap’, with an embedded inductor/capacitor tank as the wireless passive sensor, which monitors the quality of the liquid food wirelessly. The result shows a 4.3 per cent resonance frequency shift from milk stored in the room temperature environment for 36 hours.

Using fused deposition modelling technology and a multiple-nozzle system, with a printing resolution of 30μm, these 3D structures can be economically constructed, say Sung-Yueh Wu and Chen Yang of the Institute of Electronics at the Chinese Academy of Sciences. The technique uses regular 3D printing equipment to construct microstructures with embedded metallic elements of liquid metal paste. By connecting these basic components it is possible to build more complicated circuitries as well as numerous functional systems.

China Greatview Aseptic Packaging, a supplier of roll-fed aseptic carton packaging material, has developed an individually traceable milk carton with unique QR codes printed on the packages. The company has teamed up with WeChat and Chinese retailer RT-Mart to apply the technology for the ‘Selected Meadow’ Traceable+ milk by Chinese dairy product and ice cream manufacturer and distributor Mengniu.

Consumers who use their smartphones to scan ‘Selected Meadow’ products will be able to trace item-level information about the milk contained in the carton and also be eligible to receive targeted price discounts and other value added services. Bai Ying, chief operations officer at Mengniu, said: “Our partnership with Greatview, WeChat and RT-Mart has been inspired by China’s ‘Internet Plus’ strategy, which aims to integrate the internet with traditional industries.”

The availability of this function is also in line with the country’s revised Food Safety Law, which now requires manufacturers to establish full supply chain traceability systems.

The multimillion-dollar marketing campaign was part of the company’s #colouryoursummer promotion, which featured multi-coloured cans in 2014 and became #comealive for 2015. Temperature-controlled designs featured on most packaging variants, allowing it to ‘come alive’ with colour when chilled to the optimal drinking temperature, using thermo-chromic inks. Consumers were able to take a photo of their Coca Cola drink product and ‘win unique experiences’ as well as other content.

But it is, perhaps the beer sector which has shown the most pioneering spirit in adopting intelligent packaging technology to promote a brand and engage with consumers. First among these is Dutch beer giant Heineken which has used a number of different devices to show off its iconic brand.

First, it included light-emitting diode (LED) lighting in beer bottles which reacted to sound and movement, thereby creating the effect of ‘dancing’ bottles. Next, they introduced a bottle that delivers extra cold beer in an innovative way by allowing the content of the bottle to be chilled to a drinkable temperature of zero deg C in consumers’ freezers. The bottles are made from ultra-resistant PET, which allows the beer inside to remain liquid even at sub-zero freezer temperatures.

The beer apparently takes 15 minutes to reach zero from being refrigerated and up to 50 minutes when it starts the cooling process from room temperature. The smart feature of this consumer friendly innovation is that the iconic Heineken star glows red when it has reached the optimum temperature.

And to prove it is not all about lights or colour changes, the beer company has also collaborated with can makers Ball Packaging Europe to develop a new structural innovation in the shape of a groovy can. The grooved edges run around the body of the can, making it look distinctive and engaging while also offering a tactile pack experience. The grooves also provide an additional subtle benefit of a stable grip for the drinker.

Anheuser-Busch has also been incorporating active and intelligent packaging features into their products for some time. In particular, its Oculto brand, a lager blended with beer aged on tequila barrel staves, had a limited release in bottles with two interactive packaging innovations. These were launched at an event in Miami last November: a ‘first-of-its-kind’ illuminated bottle design featuring smart label technology; and ‘Relics of the Night,’ which also uses Evrythng’s Smart Products Platform to give the bottle a digital life.

To create the limited edition illuminated bottle, the brand partnered with Inland Packaging to incorporate smart label technology, featuring printed electronic pathways, paper batteries, micro switches and LED lights with a pressure sensitive label design. The pressure switch is placed where the thumb naturally falls while holding a beer bottle, and, once pressed, the LED lights begin to shine through the eyes of the mask on the front of the bottle for about three to four seconds.

The ‘Relics of the Night’ geo-targeted web application marked the first time an Anheuser-Busch brand has used IoT technology via bottle scan. For a short period, qualifying consumers were able to participate in contests by scanning the Oculto mask on their bottle and uploading their image at select events. Once uploaded, consumers were given a chance to ‘spin the bottle’ and win prizes. 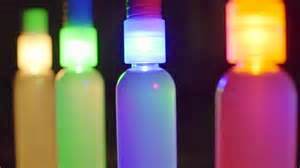 Finally, Japanese brewing company Kirin has developed the ‘Illumicap’, an innovative IoT plastic bottle cap with a built-in wireless communication and lighting system, in collaboration with White Incorporated, also based in Japan, who holds the license for selling the cap. The removable cap is equipped with a Bluetooth module and an LED, emitting light downwards. It is designed to illuminate the whole plastic bottle. By controlling the Bluetooth module, the bottle can be lit in various colours and the light can be controlled in reaction to the activities of consumers.

The cap senses and reacts to music and movement through a smartphone and illuminates the whole bottle in various colours. The brewing company plans to promote the use of the cap—whose functions go far beyond those of an ordinary cap—by releasing a part of its 3D data as an open source, and offer a new drinking experience jointly with consumers as well as universities. The company aims to commercialise the cap by the end of 2016.

With so many different brands and products using A&IP technologies, the beverage sector can truly be seen as leading the way in implementation of this type of packaging. Also, the pace of A&IP development is quickening, with many new products about to come to the market and huge interest from brand owners. In addition, costs are starting to fall, thanks to scalable production techniques, meaning more and more A&IP adding long term value and differentiation to beverages, as well as many other products. A Hold On Liquid Dairy Packaging