Foods that have a high moisture content, or are packaged in a metallised film for example, can produce what is known as ‘product effect’, and cause unwanted false readings of contaminant detection. How can this be overcome? By Jonathan Richards, head of marketing, Mettler-Toledo Safeline Metal Detection

Metal detectors consist of three sets of copper coils, made up of wire wound around a coil former, that are said to be ‘balanced’. In the centre is the transmit coil, and on either side of that are the receive coils, which are wound in opposite directions to each other with one end of each coil connected. Products are passed through the coil former to be inspected, which is more commonly known as the metal detector aperture.

A high frequency signal is transmitted to the centre coil, which generates a magnetic field in the aperture. This field in turn induces a small voltage into each of the receive coils, which will have reversed polarities due to them being wound in opposite directions. The control electronics of the detector measures the difference between the voltages which, if correctly balanced, should read zero volts.

When a metal object passes through the aperture it will disturb the magnetic fields of both receive coils by slightly differing amounts. This is then detected through a change in the balance condition and interpreted as a metal contaminant.

A material’s ability to be magnetised is referred to as permeability. High permeability metals, for example, allows the magnetic field from the transmit coil and the eddy currents to pass through it more easily than free air. Different metals alter the magnetic field in the aperture by different amounts, making some metals easier to detect then others.

What Exactly Is Product Effect?

Products with high moisture content are often referred to as ‘wet’ products—items such as fish, poultry and fresh meat, for example. These items are reasonably good conductors and are more likely to produce a signal within the metal detector that is similar to that of a metal contaminant. This makes distinguishing product from contaminant far more difficult. Moisture and salt content can of course change from pack to pack, animal to animal. Different cuts of beef, for example, could have different levels of both elements, making things more complicated still.

‘Dry’ products, by contrast, are less likely to cause significant change in the magnetic field of the metal detector. Items such as flour, for instance, will not have a significant impact on the balance state of a metal detector due to its low conductivity and permeability. However, there are some wet products that exhibit product effect but when in a frozen state produce nearly no product effect, so it is important to work closely with an expert in order to ensure your metal detector is correctly configured for these products. Reducing the sensitivity of the metal detector increases the risk of smaller metal contaminants going undetected in a product. There have been a number of product recalls due to this very issue over the years, which can have catastrophic effects on brand reputation, not to mention the associated costs of withdrawing a product from the retail supply chain.

As well as moisture and salt content affecting the performance of a metal detector, temperature of the product being inspected has a major impact on its ability to affect the magnetic field in the detector.

Changing the product temperature alters the product’s conductivity, thus altering the formation of eddy currents and the resultant magnetic field.

A frozen product is similar to a dry product to begin with due to the frozen water affecting its conductivity. As it begins to thaw, however, condensation can form on the outside of the product which changes its influence on the magnetic field. Relatively small temperature changes have the ability to change the signal in a metal detector due to the change in the characteristics of the voltage induced into the receive coils.

The size and shape of a product can also influence its detectable product signal. Typical packaged products have a uniform shape that gives a consistent product signal, which is easily interpreted by the detector. Other products, such as whole chickens, vary significantly in size, shape and weight. In general, a bigger chicken will give a bigger product signal than a smaller chicken.

The consistency and density in a product being inspected is one of the biggest challenges when inspecting products such as, for example, ready meals. A tray with mashed potatoes, sausages and gravy has a product signal, which varies significantly, with variations in both the quantity and ratio of the ingredients (or bone content in meats).

The main packaging materials used in the food industry do not impact a metal detector’s sensitivity. However, a metallised film packed product can impact metal detection capabilities, as the relatively high conductivity of the thin layer of aluminium film allows for the formation of eddy currents that generate a large enough magnetic field detectable by the metal detector.

In such cases, historically it was recommended that products be inspected before they are packaged into metallised film. However, due to the development of multi-simultaneous- frequency metal detectors on the market that are very good at inspecting metallised film packaged products with excellent levels of sensitivity, inspecting the wrapped product is now seen as the accepted norm.

Modern metal detectors available on the market today have been specifically designed to increase detection sensitivity dramatically for products that are difficult to inspect as outlined above.

Metal detectors operating at the most sensitive levels utilise a technology called multi-simultaneous-frequency (MSF)—quite simply, they use more than one frequency at the same time.

MSF enabled systems use a combination of high and low frequencies, and are typically coupled with built-in product signal suppression technology with two stages of discrimination: frequency and phase. The effect of this is to cancel the information from the combinations of high and low frequencies to remove the product signal. This allows for much smaller contaminants to be detected.

MSF is also able to deal with product variations in a very effective manner. The electronics adjust for variations in product effect for each product inspected, applying the product signal suppression technology to give an increased performance over traditional single frequency detectors of up to 50 percent— for both product effect and metallised film applications. In addition to increased contaminant detection, it is also important to consider the efficiency of your metal detector with regard to productivity. If we take Mettler-Toledo Safeline’s Profile Advantage as an example, an on board condition monitoring system has been developed to support preventative maintenance.

The metal detector monitors its own performance and functionality and if a change is detected an alarm is triggered to alert the relevant operator. The innovation element is that the alarm is able to sound in advance of a failure developing within the system, enabling maintenance engineers to rectify the problem quickly and avoiding costly and unnecessary downtime.

On board OEE reporting makes reporting on availability, reliability and quality easy, allowing the system to be scrutinised as the system data can be reviewed remotely as part of overall production line performance. Such detectors can be supplied with a Fieldbus Integration Module (FIM) to allow connection to a range of industry standard protocol (EtherNet/IP, Profinet IO or Modbus TCP) enabled devices such as PLCs and Manufacturing Execution System (MES). The metal detector also supports OPC DA integration.

The ability to inspect products with a higher level of confidence that the smallest amount of metal contaminant can be detected and removed from the production line leads to significant uptime benefits, as does the ease of use operators experience with metal detection technology.

It is important that manufacturers’ productivity is as streamlined as it can be, and that all possible measures have been taken to combat product effect so that products sent into the retail supply chain are as safe as they can be in terms of metallic contamination. Squeezing Every Ounce Of Revenue From Meat & Poultry 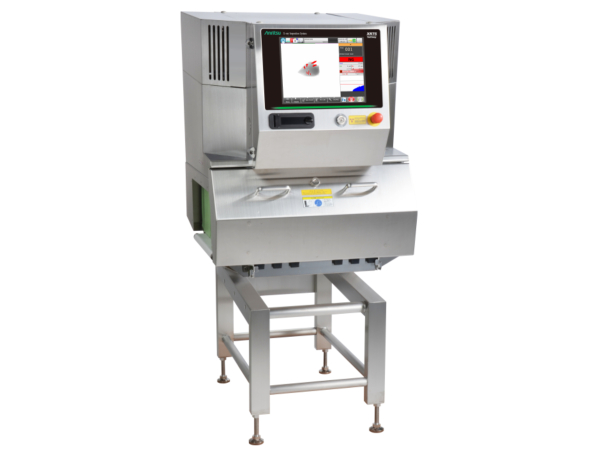