Healthier lifestyle trends and growing lactose intolerance among consumers are the major factors driving the growth of the global plant-based beverages market. Furthermore, consumer inclination toward plant-based drinks, owing to the rising trend of veganism, has led to increased investment and product launches in this category.

According to MarketsandMarkets’ analysis, the global The Asia Pacific region is projected to dominate the global plant-based beverages market, which can largely be attributed to the consumer base and growing awareness about the health benefits of nutrient-rich plant-based beverages. North America is estimated to be the second-largest market after Asia Pacific, owing to an increase in the number of lactose-intolerant population and rise in milk allergies among consumers. 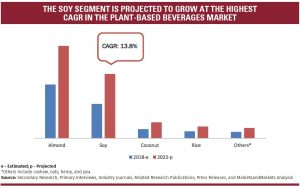 Based on the source, the plant-based beverages market is segmented into almond, soy, coconut, rice, and others (cashew, oats, hemp, and pea). According to MarketsandMarkets analysis, the almond segment is projected to account for the largest market share due to higher demand for almond milk, owing to its palatable taste in comparison with other plant-based milk alternatives such as soy and rice milk. On the other hand, the market for soy-based beverages is projected to grow at the highest CAGR during the forecast period (2019 to 2025).

Based on type, the plant-based beverages market is segmented into milk and other drinks (shakes, smoothies, and nogs). Plant-based milk is gaining popularity among consumers, due to increasing milk allergies from dairy sources and new product launches with flavor innovation and other attributes in the category from sources, such as oats, pea, cashew, hemp, coconut, and rice.

Asia Pacific is projected to grow at the highest CAGR of 13.0 percent to 14.0 percent, from 2019 to 2025, due to consumer inclination toward healthier drinks, which in turn has led to increased demand for plant-based beverages. Furthermore, China is estimated to be the largest market in the Asia Pacific region, with the growing demand for plant-based beverages (specifically soy milk), as it is affordable due to the easy availability of the raw material.

The demand for plant-based beverages is rapidly growing due to the rising trend of veganism around the world. Currently, the market is dominated by plant-based drinks such as soy milk, almond milk, and others. However, other drink products such as shakes and smoothies are also expected to gain popularity, owing to millennials’ preference for healthy beverages.

Euromonitor: What Are The Latest Beer Trends In Southeast Asia?