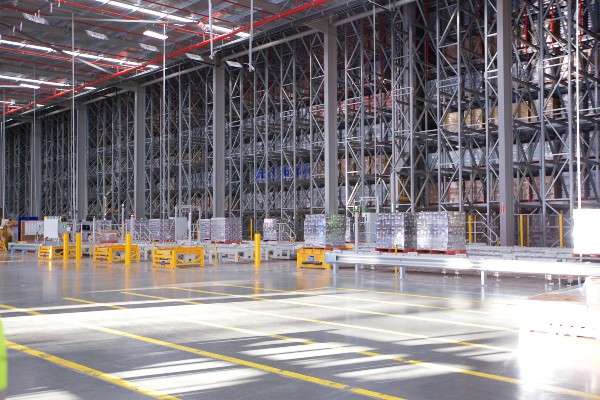 “Implementing the ASRS has set us up for the future. And I certainly am proud of what we have achieved here together with Dematic”—Nathan Lucinsky from Asahi.

Asahi Beverages is a leading beverage company that produces and distributes alcoholic and non-alcoholic products in Australia and New Zealand. With a rich and varied history, Asahi markets quality beverages, boasting a strong portfolio of established household brands and innovative, new-to-market products.

Moving On From A Manual System

Asahi has a number of distribution centres (DCs) located across Australia. Previously in Brisbane, Asahi operated across multiple locations and used manual forklifts for block stacking, which they found came with a lot of disadvantages and challenges.

Asahi recently consolidated their multiple Brisbane sites into one DC. With the development of the Heathwood DC, Asahi decided to upgrade to an automated warehouse solution, as they previously had a very labour-intensive system in place.

“Every truck that came in had to be unloaded by a forklift, then we had to receive the paperwork manually, check the pallets manually, move the pallets into the storage location and then do all that in reverse to pick them,” said Nathan Lucinsky, Heathwood DC Manager, Asahi.

In making the decision to consolidate its sites into one DC and upgrade to an automated solution, Asahi wanted to achieve a number of benefits, including reducing costs, improving efficiency and productivity, and being able to better meet the needs of its customers.

A key factor in Asahi’s decision-making process when looking for an automated warehouse solution that met the needs of their Heathwood DC was working with a company that understood the local market. Asahi chose Dematic, as it has a demonstrated capability in delivering similar projects within Australia.

“As the new automation solution would be a first off implementation, it was critical to Asahi that they get it right,” said Dominic Figliano, Project Manager, Dematic. “During the initial design and concept development phase, Dematic considered a number of low bay and high bay warehousing alternatives, but after assessing Asahi’s warehouse requirements, we knew that the best solution for them was the six-deep satellite Automated Storage and Retrieval System (ASRS).”

The high bay racking at Asahi Heathwood DC is 13 levels high, 34 bays deep, and the ASRS extends to six pallet positions deep on either side of the six cranes, which are accessed by satellite carts. In total there are approximately 31,500 pallet storage positions.

“The ASRS we built for Asahi uses Dematic’s newest and fastest crane, the 1200-1. This is also the tallest satellite system we have built in Australia,” said Dominic.

The journey of a pallet commences at one of Asahi’s two production sites in Queensland. The product is then transported to the Heathwood DC by truck. When the truck arrives on site, the driver backs onto the skate dock and then triggers the automated device to align the trailer and commence the unloading process. Skates extend into the back of a trailer, the airbags fire and lift those pallets off the floor of the trailer.

At this point the skates then retract back onto the dock, the airbags deflate, chain conveyors then carry the pallets onto our main conveyor loop in warehouse.

The pallets then go through an automatic profile check where they are validated against the specification requirements of the ASRS system. The conveyor loop delivers the pallet to the drop station where the ASRS system takes over.

The crane lifts and drives the pallet to the assigned put away location, and then a Supercap cart takes over and it drives that pallet out into the satellite and stores the pallet.

The ASRS is directed by Dematic WCS software. In the auto control room and also at workstations out in the plant, operators interact with WCS GUI system and they also have the benefit of a SCADA system, which they can use to monitor the real-time health of the system.

In addition to the ASRS, Dematic also integrated third party equipment including the skate docks, a stretch wrapper machine, automated label applicators, and a pallet inverter.

Prior to construction of the Heathwood DC, Dematic was involved with the process of choosing a new site for the new DC to ensure the location would fit Asahi’s warehouse requirements, as well as the requirements of the new system Dematic had designed.

“Asahi’s DC was a greenfield site when we started working on the installation of the ASRS, which involved a number of challenges,” said Dominic. “Because the DC was still a building site there were builders, electricians, concreters and other contractors and workers on site that we needed to coordinate with and work in conjunction with. For example, we had to closely coordinate with the fire sprinkler installation to ensure sprinklers fit within the racking and met requirements.”

Close coordination and scheduling was also crucial to coordinate the various equipment being used by all the different workers so that the project deadlines stayed on track. Dematic had two crews on site, using up to two 80 tonne cranes, four boom lifts and two scissor lifts.

“We had up to 50 people on site and completed part of the installation during the night in order to ensure we maintained the schedule and delivered the project on time.”

Another key aspect of the system roll-out was the training that Dematic provided to the Asahi team once installation was completed.

“We provided superuser training to Asahi, which involved taking small groups and providing both theory and hands-on training on how to use the new system. Those superusers were then able to go on to train other Asahi DC workers in the future,” said Dominic.

Due to the Heathwood DC having high bay racking, additional focus was put on safety in working with heights.

The rollout of the new system was successfully completed in May 2019.

The standout benefits of the Dematic system are the high storage density and the reduced footprint that the ASRS occupies, which allows Asahi to consolidate all their operations into a single site. This unlocks cost savings from reduced rental, less complexity in servicing its customers, less shuffling pallets which can lead to damages and errors, lowered transport costs, and faster truck turn times.

“An automated system such as this eliminates a lot of the manual handling of pallets,” said Dominic. “This not only creates efficiencies and a high productivity boost of 250 percent for the customer, but also increases safety for workers in not having as many forklifts.”

In a DC such as Asahi’s Heathwood site, each manual touch of a pallet represents a cost to the business and comes with the risk of human error.

Since automating its warehouse processes and only using manual process where it makes sense, most of Asahi’s pallets won’t be touched by a human until they get to the customer DC.

“When we think about the amount of touches that go on within a warehouse process, each touch is a cost to their business,” said David Rubie, Industry Manager F&B Manufacturing, Dematic. “So, having that process automated and using manual labour work only when most makes sense is a really great way of actually running a logistics enterprise.”

“When we were designing the facility for Asahi and looking at that the expected occupancy, Dematic calculated that we should be choosing an overall operation occupancy of about 89 percent,” added David. “We’re pleased to see that Asahi are exceeding that now with a 90 to 92 percent occupancy across the facility.”

Set-Up For The Future

Dematic has provided Asahi with ongoing support with onsite service technicians to ensure the success of the ASRS system at the Heathwood DC.

“The resident Dematic technicians have been critical to the success and the smooth running of our site,” said Nathan. “The relationship they have with our Asahi shift teams is fantastic. Their communication and working towards understanding our operational constraints have been first rate.”

Having the Dematic support throughout the project has helped Asahi to build on their own knowledge of how automation works, especially ASRS. This has enabled them to get the most out of their new solution and ensure the Heathwood DC continues to run as efficiently as possible.

“One of the things that excites me about systems such as the ASRS is that it’s going to be safe for our DC workers,” added Nathan. “With the automated system, our warehouse operations run like clockwork, there is no longer the need for so many workers doing manual labour.”

“Implementing the ASRS has set us up for the future. And I certainly am proud of what we have achieved here together with Dematic.” Is Automation Only For Large Companies? An Interview With SSI SCHAEFER A Step-By-Step Guide To Automating Your Cold Chain Operations Should You Consider Buying Pre-Owned Forklifts?