Dairy testing is an application in food safety testing that is used to test, verify, and analyse the safety and quality of milk and dairy products in order to provide safe and high-quality products to end consumers, while simultaneously adhering to regulatory requirements in terms of permissible limits of contaminants, labelling laws, prevention of fraudulent practices, and unwanted incidents of foodborne illnesses, toxicity, or poisoning.

The growth in the dairy testing market is attributed to the globalisation of dairy trade and stringent safety & quality regulations for food. Lack of coordination between market stakeholders and improper enforcement of regulatory laws & supporting infrastructure in developing economies are the major factors restraining growth in this market. 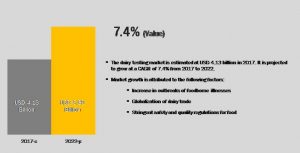 According to MarketsandMarkets the dairy testing market is projected to grow at a CAGR of 7.4% from 2017, to reach a value of USD$5.89 billion by 2022. Among the various types of dairy testing in the food industry, the safety testing segment is projected to witness the fastest growth during the forecast period. The growth of the safety testing market can be attributed to the increase in dairy trade; this has been responsible for the growth of the dairy testing market as products need to meet the quality standards of the importing country as well. Further, milk is often adulterated by dairy producers with adulterants such as water, melamine, and caustic soda for the purpose of making economic gains. Thus, significant emphasis has been laid on safety testing of food output with regulatory authorities focusing on addressing regulatory loopholes, preventing adulteration, and malpractices, labelling mandates, implementing several practices such as GMP & HACCP, and continuing research on determining the maximum residue limits for contaminants in food. As a result, safety testing for dairy has gained vital importance over the years. The market for dairy testing is largely concentrated in Europe, followed by Asia Pacific, in terms of value. The large market share in this region is attributed to the highest number of testing laboratories in the world. Also, the region has the most stringent regulations that also undergo frequent updates. Due to the strict regulations, the highest number of sample tests are conducted in Europe for both safety as well as quality. Strict compliance with MRLs and the prevention of microbial contamination are the preconditions for entering the European market. Asia Pacific is projected to be the fastest-growing region for the dairy testing market, in terms of value. This is owing to the highest number of safety incidences due to lack of coordination between market stakeholders and improper enforcement of safety laws due to which it accounts for the highest number of food safety incidences.

Furthermore, growth in the North American region is driven by the stringent regulatory framework in the US, Canada, and Mexico. The market in this region is attributed to high stringency in food safety regulations, labelling laws, their enforcement & effective monitoring, a significant focus on consumer protection and their interests, and consequently, the large number of sample tests conducted in correspondence to dairy production and trade.

The market is dominated by major players such as SGS (Switzerland), Eurofins (Luxembourg), Intertek (UK), TÜV SÜD (Germany), Mérieux NutriSciences (US), ALS Limited (Australia), Bureau Veritas (France), and TÜV NORD GROUP (Germany). These players primarily focus on acquisition as its major strategy to obtain leading market positions, catering to the varied requirements of the market, along with a focus on the diverse end-user segments. They also focus on innovation and are geographically diversified.