Our paediatric nutrition experts have made huge advances over the past 60 years into developing and analysing infant formulas in relation to breast milk, says Bertram Fong, Senior Research Scientist at Fonterra.

The role that breast milk was designed to play in human growth is quite incredible—after thousands of generations, we’re still learning about its benefits and composition. What’s always been clear, though, is that breast milk is best for babies for the first six months. But when an infant is unable to be breastfed, infant formula is the only suitable alternative.

Our paediatric nutrition experts have made huge advances over the past 60 years into developing and analysing infant formulas in relation to breast milk. We’re helping to narrow the gap between the two by focusing on how to best utilise the milk fat globule membrane (MFGM), which is unique to mammalian milk, thus ensuring a balanced composition in infant formula. Currently, many infant formulas contain a blend of vegetable oils with a lipid profile that is simpler than that found in breast milk to boost fat levels. But pure vegetable oils, unlike cow’s milk, do not have MFGM.

We look to breast milk as the gold standard nutrition for infants in the first six months of life, and better understanding its composition and structure to inform infant formula development. We continue to invest resources in understanding the impact of MFGM lipids on brain development and cognitive outcomes in infants. It’s exciting to see emerging evidence which suggests they function in a similar way as they would in breast milk; with potential anti-viral properties for immune benefits and support of gut maturation (Bhinder et al., 2017; Anderson et al., 2018) for digestive health.

As an analytical chemist, I’ve been at the forefront of developing the test methods for measuring the components of MFGM including their detailed chemical composition. Our most recent work on the proteins of MFGM has been presented at a number of high-profile scientific conferences and one of my colleagues will be sharing our latest results on the characteristics of MFGM protein composition at ESPGHAN this month. We’re continuing to look at the composition of human breast milk and characterising the MFGM proteins to understand it better and how our NZMP ingredients may provide a solution to add these components back into infant formula.

NZMP SureStart MFGM Lipid 100 is a patent protected ingredient in many jurisdictions that has undergone extensive study. A clinical study was carried out in China to investigate the effects of providing additional MFGM, gangliosides and phospholipids during pregnancy and in infancy (Xia et al., 2018). The infant study looked at the effects of providing MFGM to support cognitive development. Preliminary findings on supplementation with MFGM in healthy infants in the first 12 months of life showed statistically significant improvements in some aspects of cognitive development. MFGM supplementation improved general adaptive behaviour scores, which are based on the development of a combination of functions such as social and motor skills, self-direction, communication and self-care. 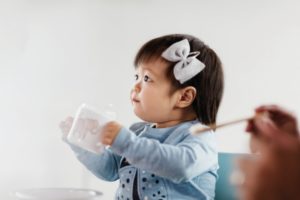 An infant’s brain grows rapidly to about 80 percent of the adult brain by the time they’re two-years-old. To grow at this rate the brain needs a good source of energy and nutrients that provide the building blocks. We know that 35 percent of the total brain is complex lipids and that from the second trimester in-utero until three years of age there is rapid accumulation of complex lipids such as gangliosides. These support the rapidly developing brain and cognitive functions such as language and memory. From here we see synaptic connections in the brain start forming and reorganising themselves.

Give Your Children A Head-Start To Life-Long Health